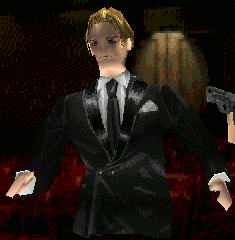 Aya's Date is a minor character in Parasite Eve.

According to Aya Brea, he kept "pestering" her for a date. He went to an opera at Carnegie Hall with her.

The show was on fire, literally, when the audience began to immolate. He inexplicably survived the initial immolation and was shoved by Aya to escape.

It is unclear if he survived. Daniel Dollis mentions "he ran outta there like a wuss". However, the media later claims Aya is the sole survivor of the incident". Either way, he never truly got together with Aya as she fell for Kyle Madigan, and if he did survive the incident, he would likely have severe PTSD.

Aya shoves her date.
Add a photo to this gallery
Retrieved from "https://parasiteeve.fandom.com/wiki/Aya%27s_Date?oldid=16877"
Community content is available under CC-BY-SA unless otherwise noted.