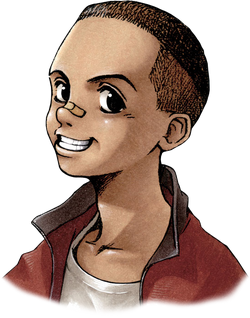 Ben Dollis is Daniel Dollis's son and a minor character in Parasite Eve.

Perky and inquisitive, he is Daniel's main motivation throughout the game. He was disappointed with his father's complete commitment to his work over him and his mother, Lorraine.

A year prior to the game, Ben's parents became divorced. Daniel has custody of him, but his mother is given visitation rights once a month. He appears to be fine with his parent's divorce on the surface, but deep down inside he hopes that they will all live together again someday.

On December 25th, 1997, Ben attended a concert at Delacorte Theater in Central Park with his mother, Lorraine, only to feel ill part way through and ended up leaving the area and his mother at the concert.

Shortly after he left, Mitochondria Eve came and killed/transformed the audience, his mother included. Ben was very disturbed by his mother's death and was quickly found by his father and his father's partner, Aya Brea.

After the game, Ben attended an opera at Carnegie Hall along with his father, Aya and Kunihiko Maeda. He received what he always wanted: a father that is dedicated to him.

Ben escorting Aya to the play.

Ben watching the opera.
Add a photo to this gallery
Retrieved from "https://parasiteeve.fandom.com/wiki/Ben_Dollis?oldid=17014"
Community content is available under CC-BY-SA unless otherwise noted.