Brain Stingers are gangly humanoid creatures known to be very intelligent as they are even capable of speaking (in one scene). They are a powerful ANMC and are one of two types of Stinger species. They also feature high Defense, 50% resistance to fire attacks and (consequently) do not take a lot of damage. Electrical attacks can stun them for a good amount of time and Necrosis is great at preventing them from attacking, allowing Aya to easily destroy them.

Their attacks are dangerous as they can produce status ailments and can heal themselves.

Typically, they appear in pairs, making it important to focus down one and keep the other stunned or out of sight (if possible) so they do not destroy Aya. Metabolism or status recovery items can be very important while fighting them.

The first Brain Stinger (Fred Bowman) can be fought in Shelter, B1 Northern Maintenance Walkway to find a key item, Bowman's Card. 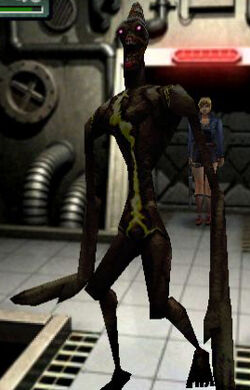