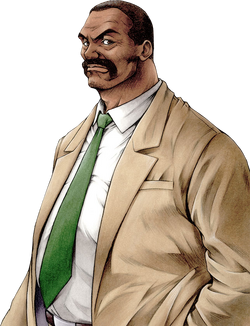 Daniel "Bo" Dollis is a veteran detective from the 17th precinct of N.Y.P.D. Daniel is Aya Brea's partner in work, and a friend of hers both inside and outside of work. During the events of Parasite Eve, he helps her fight Mitochondria Eve.

Daniel has been part of the police for at least twenty years.

He is the father of Ben Dollis. Daniel has sole custody of Ben, although his ex-wife Lorraine has visitation rights once a month. Lorraine divorced him one year prior to the game because she felt he put his work above his family.

Although he is unable to take care of his son properly due to the devotion to his job, Daniel has a strong paternal sense and is very protective of Ben and also of Aya.

In the game, it is stated that he joined the police in the same promotion as Douglas Baker, the chief of the homicide department and, at the time of the game, his boss. Daniel and Douglas were once partners and solved many crimes together, although Douglas gradually shifted towards deskwork in contrast to Daniel who concentrated on crime scenes.

Daniel first appears to pick Aya up from the incident at Carnegie Hall, punching a nosy news reporter for interrogating Aya after she asks him to leave her alone. He serves as a supporting role for Aya, giving her encouraging words of experience while he attempts to function with the terms of his divorce.

His ex-wife Lorraine is is killed by Eve at Central Park, causing Daniel distress, but also instills a desire in him to take revenge on Eve.

Prior to Aya's confrontation of the Ultimate Being, he nearly sacrifices himself in order to deliver special mitochondria-laced bullets to assist her in the battle.

He also finally reconsiders the effects of neglecting his son to focus on his job and is shown spending more time with Ben, even going to Carnegie Hall to watch an opera with him.

In the events of the second game, he is presumed to be still working at the N.Y.P.D. police district. Though he doesn't make an actual appearance, he's briefly mentioned by Aya as being a terrible cook, and is compared with Gary Douglas; Aya noted both men were "stubborn, but with a heart of gold."

Aya and Daniel in a police car.

Daniel and Aya having a moment.

Daniel interrogating Klamp on why Ben's and Lorraine's names are on his computer.

Daniel at the harbor.

Daniel in the driver's seat of the police car.

Daniel asked to sit down.

Daniel under mitochondria possession.
Add a photo to this gallery
Retrieved from "https://parasiteeve.fandom.com/wiki/Daniel_Dollis?oldid=17018"
Community content is available under CC-BY-SA unless otherwise noted.