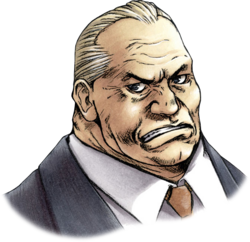 Captain Douglas Baker is the chief of the N.Y.P.D. homicide department in Parasite Eve.

Douglas started his career as an officer in the same year as Daniel Dollis. The two became close and were partners. After many years, the two split ways -- Douglas preferring a desk job while Daniel chose to be in the field. The two drifted apart after that. Now at the age of 41, Baker is now the Chief of the NYPD Homicide department and the boss of Aya Brea and Daniel Dollis.

Throughout the game, Baker gives orders to Aya and Daniel regarding the case of Mitochondria Eve.

On Day 2, the police attempt to suppress Eve's existence from the public, due to the lack of clear details and eyewitnesses, as well as to prevent mass hysteria and panic. In the following press conference, Baker covers up the incident, claiming a flammable chemical began the fire. Some reporters wonder if Eve is an alien or the work of a terrorist. After Baker answers every question, a reporter says, "I'm asking HER the question!" Aya then reveals the truth, despite Baker telling her to be silent. After the conference, Baker yells at Aya for speaking up. Aya defends herself, saying that what she said is the truth, but Baker retorts that it does not matter if it's the truth.

On Day 3, during Eve's assault on the police station, Douglas and Ben Dollis head to the top floor, where they witness Sheeva's transformation into Kerberos.

Baker at a N.Y.P.D. press conference about Eve.

Baker carries Ben away from Sheeva.
Community content is available under CC-BY-SA unless otherwise noted.
Advertisement