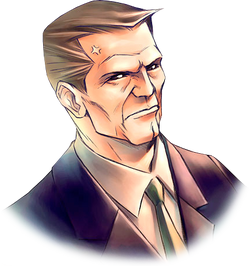 Eric "Hal" Baldwin is the leader of M.I.S.T. during Parasite Eve II.

He is a strict man who expected excellence from his agents. He had a cold and calculating demeanor, which made him push his people to finish the mission, but congratulated his people on a job well done at the end of their missions. He was the superior of Aya Brea, Jodie Bouquet, Rupert Broderick, Pierce Carradine, and others.

Aya and other members were unsure about him and his background but never said otherwise. Some of them also respected him enough to call him "Hal" from the supercomputer of the same name in 2001: A Space Odyssey by Arthur C. Clarke since he has the personality of a computer.

He gave orders to Aya and the others through the phone in the game. He discussed tactics with Aya, Pierce, and Rupert. He requested that Aya sent to Dryfield in the Mojave Desert, which lead the discovery of the Neo Ark.

During the secret events and ending, it's learned that Baldwin was working for the Ark Shadow Government, which built the Neo Ark under the Mojave Desert whom Aya had been trying to stop the entire game. He was leaking MIST data. Baldwin is arrested, and it's unsure if he's imprisoned after.