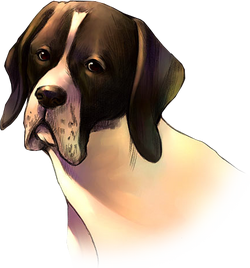 Flint first appears while Aya Brea is staying in Dryfield and will help Aya in many ways throughout the game. Flint demonstrates obedience, intelligence, bravery and loyalty as he aids Aya during her time in Dryfield and later in the Shelter if he survives an an important boss battle.

Aya first meets Flint in the Junk yard as though he was waiting for her to arrive. Upon meeting, he immediately notifies Mr. Douglas of her arrival. After some time in the Trailer coach talking about the Shelter, Flint escorts Aya to the well at the Driveway. Flint is not seen again until nighttime where he stays alongside Mr. Douglas while he in the Trailer coach and later working on fixing up his truck in the Garage. After obtaining some Gasoline for Mr. Douglas, Flint stands guard in Main Street while Aya retires to her room for some rest and relaxation.

Flint spots the incoming Burner NMC and starts barking at it, but Aya does not hear him barking. Aya becomes aware of the creature herself when she feels the hotel shake. Flint and Mr. Douglas are forced to seek refuge while Aya engages the behemoth on the Motel balcony. Depending on the outcome of this battle, Flint will either be killed if it manages to escape (Not enough damage is done to it within the game's 3-minute time limit), or will survive as Aya manages to slaughter the giant creature. Either way, Aya has to meet up with Mr. Douglas to check on the their fates.

Should Flint survive, the following changes happen to the game's progression:

Changes to the Game

Flint's survival or death changes a couple cutscenes, but also affects what items are available as the game progresses:

Contrary to popular belief and certain strategy guides, Flint's fate does not affect the game's ending. Pierce's fate controls how the game ends and he can be rescued just as easily without Flint's assistance.

Aya finds Flint outside the shelter.
Community content is available under CC-BY-SA unless otherwise noted.
Advertisement