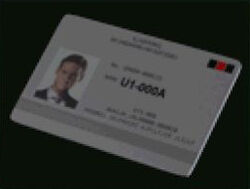 Fred Bowman was the lead researcher of Neo Ark.

He was described as appearing to be a "nervous, middle-aged man". Being well known as a generic mad scientist, Bowman was also experienced in the field of mitochondria.

On January 17th, Bowman joined the Shelter from an out-of-state facility, spending weeks of research on artificial human life. On March 8th, he volunteered to become a test subject on the development of the ANMCs, and he was transported by No. 9 via cage as the first of the Brain Stingers.

His crazed mind had affected him with bloodlust, and he seemed to feel no ounce of pain, even when receiving an artificial organ and bone transplant. Even so, he would range from foully swearing to suddenly weeping. It is mentioned he grew to 9 ft and 3 inches tall. The following month, using pity to gain their trust, Bowman devoured a female researcher before hiding, possibly in the ventilation shafts of the Shelter.

On September 6th, 2000, Bowman was encountered in the shelter and slain by Aya Brea. Aya receives the Bowman Card after. This only occurs in the True/Good and Normal endings path - if the player is following the Sad/Bad ending path, they will receive the Yoshida Card from Kyle Madigan instead.

Retrieved from "https://parasiteeve.fandom.com/wiki/Fred_Bowman?oldid=16932"
Community content is available under CC-BY-SA unless otherwise noted.