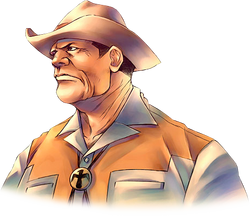 Gary Douglas, who prefers to be called Douglas or Mr. Douglas, is a middle-aged man dressed in cowboy clothes who runs an auto-shop in Dryfield.

He is also a firearms enthusiast and a strong advocate of gun rights, and will sell Aya Brea supplies for BP, as MIST agreed to pay him back later.

Douglas is a decorated Vietnam War veteran who lost a leg in a minefield. Because of this, he is unable to do much physical activity.

After returning, he started a scrapyard business in Dryfield and has been living a quiet life with his dog, Flint.

He also says his wife would complain about his gun enthusiasm.[1] Any information about this "wife", such as if she is still with him or deceased, is unknown.

An intimidating man in his own right, he's a little untrusting of everyone he comes across. When NMCs are reported in Dryfield, he contacts the FBI. Douglas seems to be used to the creatures attacking people in the area; he escapes them every time and always has his trusty shotgun in hand in case anything happens.

He finds Aya in his garage and aims a shotgun at her, but she tells him she's a MIST agent and is convinced by her badge. He is annoyed they only send a "city girl" alone and somehow, is totally unaware that she saved New York City and all of humanity two years ago, probably due to living in Dryfield, although he remarks the name "Aya" sounds familiar. He eventually accepts Aya as a decent person. He gives her a key to the motel.

During the Burner boss fight at his motel, if Aya manages to save his dog Flint, he gives her a new gun (an M950) and respects her while forming his version of a friendship with her. If Aya doesn't manage to save his dog, he leads her to the Chicken Plate.

If the good ending is obtained, it's revealed that Douglas was seriously injured in the Dryfield explosion caused by the SDI Elephant, but eventually recovered and began an effort to rebuild the town. He sent Aya a picture of a rifle scope with a price tag attached.

Douglas in his office with Aya and Flint.
Community content is available under CC-BY-SA unless otherwise noted.
Advertisement