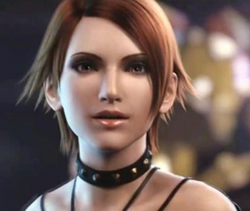 Ginger, real name Kristina Ruskin, is a character from The 3rd Birthday. She is the lead singer of the rock band called Sacrifice playing during the Sacrifice Incident at Club Sacrifice on Christmas Eve 2012 in New York City, and while her role is minor, she seems to have a sixth sense about life.

Ginger was born in Munrich, Germany. She is the daughter of violinist Erhard Ruskin, who was a strict father that directed the German Symphony Orchestra.

At 13 she rebelled against him by starting her own rock band, Time for Truth. They had then caught the attention of a major British record label that lead her to a professional debut at 15. Her first album, "Killing Hour", sold over two million copies, an unprecedented performance for a debut album.

Soon after, she moved to the United States. She had disbanded Time for Truth at 20 to take a break. Her and her former band mates still continued to play concerts as a new band called "Sacrifice" whenever they felt like it, causing the media and her fan base to still follow her closely.

It is thought that Ginger died during the Sacrifice Incident. A handwritten will was found in her room stating all her financial assets were to be given to poor, unfortunate and disadvantaged children: "I leave everything I have to the less fortunate children." An upset Blank mentions that the media didn't report on this much, not when there's money to be earned in cheap gossip and innuendo.

As a result of Eve Brea being removed from the timeline completely at the end of The 3rd Birthday, Ginger's history changes. She still becomes a famous singer, but she was fatally stabbed by a crazed fan in Central Park in 2009.

It was revealed after her death she had been traveling to disaster-stricken areas and working on behalf of many aid providers and relief efforts, all anonymously. Once this news was revealed, a group of young people in England commemorated Ginger's inspirational life by establishing the Ginger Skimbleshanks Fund to help children around the world who are suffering from hunger, poverty, disaster, and war. The fund takes its name from Ginger's favorite character in the famous musical, Cats.

It seems no matter how Aya changes the past, Ginger was meant to die young.

Concept art of Ginger and her band
Community content is available under CC-BY-SA unless otherwise noted.
Advertisement