View source
watch 01:36
We're Getting Mutants in the MCU - The Loop
Do you like this video?
Play Sound
Hans Klamp 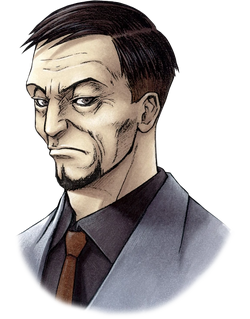 Dr. Hans Klamp is a scientist who, like Kunihiko Maeda, has dedicated his life to studying mitochondria. He is one of the masterminds behind the terrible events that occur in Parasite Eve.

Klamp is extremely intelligent. Following the timeline, he was still a teenager (about 17 years old to be exact) when the Breas were hospitalized at St. Francis Hospital and he was an intern there, which is unusually young. This also implies Klamp was a young genius and may have graduated high school/college/university early.

However, one could say that Klamp lost his humanity by immersing himself in science, viewing people as bodies that are products of evolution, instead of sentient beings with emotions who are worthy of respect. He has a very misanthropic, sadistic and cynical view towards humanity, considering humans "pathetic", "weak" and "stupid", and speaks as if he does not consider himself human ("you ordinary beings", "you humans"). He considers man-made laws, such as police laws, as being part of the "human domain" and does not consider himself part of the human domain. As a result, Klamp is a selfish, brash and unhelpful man who does not seem to care about anything except himself and his work. He is described as very anti-social, as he wants to be left alone with his research.

Despite being a general misanthrope, he seems to be a proud New Yorker, calling it a "fine city".

Around 1977, he was a hospital intern at St. Francis Hospital in New York City because he wanted to become a doctor. It is possible he was responsible for the kidney transplantation from Maya Brea to Melissa Pearce, and also possibly the cornea transplant from Maya to Aya. According to Truebred Eve, even after the transplant, he continued to study Maya's liver cells which had Eve, and he eventually cultured a body of "Maya".

He was fired when he was caught stealing and selling the patients' medical records and HLA (human leukocyte antigen) lists, for matching tissue type in organ transplantations.

He eventually obtained a Ph.D and became a researcher at the American Museum of Natural History, studying genes and mitochondria.

Melissa Pearce was seen going into the museum at night, presumably to meet with Klamp, and with Mitochondria Eve as the dominant persona. Eve and Klamp collaborated and planned to eradicate humanity in order to begin a new world with a higher species of ultimate beings. Although the game does not mention it, it is also possible that the two had a relationship and Eve may have seduced Klamp.

Eve told Klamp her sister in Japan was unable to attain her ultimate goal because the father's side of the mitochondria caused a rebellion. In order for Eve to succeed this time in becoming pregnant with the Ultimate Being, Klamp created sperm without the male mitochondria DNA. Klamp created this sperm at the museum lab and moved it to St. Francis Hospital, where he planned on artificially inseminating those who would volunteer for the experiment.

On December 25th, 1997, Aya Brea and Daniel Dollis visit him at the American Museum of Natural History so that they could get some answers about the previous day. Aya recognizes Dr. Klamp from her memories, but isn't sure why. Klamp informs Aya and Daniel about mitochondria and Mitochondrial Eve. After Aya reveals the suspect of the case called herself "Eve", Klamp seems surprised and refuses to answer any more questions.

On December 26th, Aya, Daniel, and Maeda went back to the museum because Maeda wanted to test Eve's mitochondria. Klamp suddenly appeared, despite that New York is being evacuated, and after seeing Aya's mitochondria, asked if she felt any changes, but was interrupted when Daniel saw the HLA list on his computer which had Ben's and Lorraine's names on it. Daniel angrily confronts Klamp, but Klamp orders everyone out.

On December 28th, Aya investigates the museum and sees Klamp locking a door to prevent her from searching any further. Aya eventually makes it to Klamp's room where he isn't there, but Maeda is. Maeda reveals that Klamp helped Mitochondria Eve by developing special artificial sperm without the male mitochondria DNA (only containing the nucleus) so that she can give birth to the Ultimate Being under her influence. Klamp appears and Aya attempts to arrest him; in response, Klamp calls her pathetic and asks her why she "puts herself in the human domain" by reciting "meaningless laws". Not wanting anyone to interfere with Eve, Klamp attempts to stab Aya with a scalpel but fails to attack her because Daniel intervenes by punching Klamp to the floor.

Klamp explains that Eve is pregnant with the Ultimate Being and he raises his arms to the ceiling, saying that he is now "ready" and asks Eve to "take him". Klamp then bursts into flames and and collapses. Aya, still sympathetic towards Klamp after everything he's done, helps him by putting out the fire in his final moments to which he questions the logic and reason for her compassion, but Aya simply says that it is what she as a human being must do. Klamp's cold view and opinion of humanity is unchanged as he dies.

He is referenced in Parasite Eve II in a Scientific Journal in the Akropolis Tower cafe where the woman transforms into a monster, and if the player examines the journal in the key items menu. He is mentioned as being believed to be the one who was held directly responsible for the New York Blockade Incident as part of the cover-up that followed afterward. His name is erroneously given as Dr. Hans Klaup.

Klamp politely telling Aya and Daniel to get lost.

Daniel interrogating Klamp on why Ben's and Lorraine's names are on his computer.

Aya staying with Klamp as he dies.

Klamp's brutal death in the manga.

Klamp's brutal death in the manga.
Community content is available under CC-BY-SA unless otherwise noted.
Advertisement