View source
watch 01:36
We're Getting Mutants in the MCU - The Loop
Do you like this video?
Play Sound
Jodie Bouquet 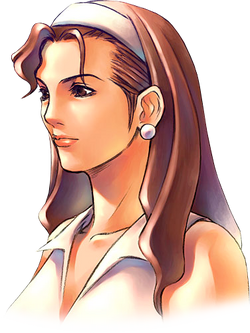 Jodie Bouquet is the only other female M.I.S.T. member besides Aya Brea and considers her a dear friend. She is a minor character in Parasite Eve II.

Jodie offers Aya advice at the start of the game. Jodie jokes with Aya about Pierce Carradine's inexperience with firearms; He loaded a revolver, presumably .38 caliber, with 9mm Parabellum ammunition. "I mean duh, right?! That's why ammo is in different color boxes. Apparently it was quite a sight when he tried to fire it.". She is also the first one to mention Aya's tendency to disobey orders.

Jodie will sell Aya guns and equipment for BP at her Bouquet's Guns and Ammo shop, which Aya can earn by completing the Shooting gallery in the training area and later the Akropolis Tower. When the game is beaten and various items for Replay Mode become unlocked, they will be first available with her shop.

Depending on the ending a player receives, they will either meet Jodie or Rupert Broderick outside the shelter towards the end of the game; Rupert for the bad ending, Jodie for the good. In the "good" path, Aya finds the note Pierce left in the Pod Service Gantry and calls M.I.S.T. HQ. Jodie answers the phone, and Aya tells her about Eric Baldwin's involvement in the conspiracy. She informs Rupert immediately upon learning of this. Later, Jodie meets Aya at the Army camp outside the shelter to inform her of Baldwin's arrest. She mentions she is mildly jealous of the way Pierce always tries to help Aya, and becomes concerned when Aya mentions he is still missing. While Aya was being questioned by Lieutenant Grant, Jodie arranged for all of Aya's inventory to be relocated to the camp, obtained permission for Aya to purchase equipment for BP and free access to various types of ammunition.

Following the incident at the shelter, Jodie works with Rupert on a secret project: the full public disclosure of MIST and the NMCs.

Jodie outside the shelter.

Jodie outside the shelter.
Community content is available under CC-BY-SA unless otherwise noted.
Advertisement