Kyle Madigan is a High One boss in The 3rd Birthday. He is fought at the end of Chapter 4: The Moment of Truth on the roof of North Shallows Tower.

His appearance is that of a huge Twisted resembling a coiled snake with a flowered tail.

This fight is timed and you have only ten minutes to defeat Kyle Madigan before the nuclear strike sent by the military to destroy the Babel takes place.

Get Aya to the right side of the top tier of the building until you find a set of stairs going down, you can use this structure to shield yourself from Kyle's attacks. Either attack from here or wait for the helicopters to arrive.

When the helicopters show up, it's best to Overdive into one of them. Fire away, keep your finger pressing the "missiles" button the whole fight, as they can home into the boss and they're automatically fired as soon as a new one is ready in the chamber. The machine gun should be fired only when the enemy is near and almost directly in front of the helicopter, as its targetting system is quite bad and you should score more hits while using manual aim, just make sure you don't let it overheat.

Dodge Kyle's circular-blade saws as best as possible. The three smaller ones have homing capabilities and can corner you easily. Keeping your helicopter in movement and not cornering yourself is the key to avoid this attack. He'll also shoot a giant circular-blade saw in your direction, he can shoot it either horizontally, vertically or diagonally at your last known location. When he's at his last HP bar and about to die, he'll be even more aggressive and will add two new attacks to his repertorie. One of them consists in shooting two giant circular-blade saws diagonally at the same time, forming an "X" pattern. The other one consists in shooting one of his giant circular-blade saws, but this time it will be rotating on its own axis, forcing you to move, looking for an opening to dodge it. As the battle continues, he'll combine any of these attacks in any random manner (i.e.: launching the smaller saws first, followed by a big one, or shooting the bigger one first and then the smaller ones).

When Kyle summons his "Evil Eye" attack, eight eye-like orbs will spawn around him, concentrate on destroying these first as Kyle can't be harmed while they're present. Put your machine gun to good use here, but be very careful not to let it overheat or you'll lose precious time while you wait for it to cool down. Also, keep firing missiles, and make sure you manually target them (using the directional pad) to hit the eyes. If all of the eyes are not destroyed fast, they will shoot a blinding light which won't let you see for a brief period of time. You can either Overdive to the other helicopter (or soldier) or you can stay there and try to shoot at Kyle, which may be the best alternative as he won't be very aggressive while the screen is blank.

Another soldier (a sniper) should appear shortly on the top tier of the building. He should be used as an emergency body in case both helicopters are destroyed. If you're forced to Overdive into him, keep evading Kyle's attacks and soon another helicopter will arrive. This soldier also can be used in case you're lucky enough to trigger an Overdive Kill on Kyle, but you should be very quick to Overdive into him and perform the move before Kyle recovers.

One of Kyle's most deadly attacks is when he strafes to a side of the screen and quickly lunges toward the front, an attack that can destroy a helicopter in perfect conditions in a single hit on higher difficulty settings, although he will telegraph this attack by teleporting three times, giving enough time to get in the center and move to the side he is not on. When the boss is down to his last two HP bars, he can combine this move after shooting a barrage of homing saws first.

He has another attack which has three variants.

As the battle continues, he'll put his head away from you and instead confront you with his flower-shaped tail. The tail is impervious to any attack and acts as a shield. The only way to harm Kyle in this stage of the battle is to try to launch missiles that outflank the edges of the tail and hope that their homing capabilities hit the head on their way, or you can Overdive into the other helicopter (or soldier) and try to shoot at the head from that position, although most of the times that means that the first helicopter will be destroyed.

At some point during the battle, Kyle will stop in mid-air and start to laugh. At that moment he'll draw his attention toward any soldiers left at the top tier of the building and shoot his Twisted rays at one of them, which will kill the soldier instantly. If you have your Liberation bar full, you can save the soldier by Overdiving into them and activating Liberation as soon as the soldier is being killed. Unfortunately, the soldier will still die once you Overdive into another soldier, so it's more advisable just to let the soldier die and take that opportunity to score some free hits from your helicopter.

Once Kyle's HP has been depleted, Overdive Kill into him to end the battle.

Your face-off against Kyle is also a battle against the clock, with the military counting down to a tactical nuclear strike.

Another special case like Emily and Gabrielle before him, Kyle's self-awareness and intelligence distinguishes him from the run-of-the-mill Twisted.

It attacks Aya with sweeping barbed projectiles and a number of different blades. However, its greatest threat it Kyle's Evil Eye. Each of its eight eyes is a wormhole to a parallel universe: unless every last one is destroyed, time as we know it will be blown away and reality will be eliminated - sucked into that parallel world. 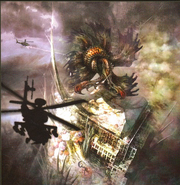 Art.
Add a photo to this gallery
Retrieved from "https://parasiteeve.fandom.com/wiki/Kyle_Madigan_(boss)?oldid=16330"
Community content is available under CC-BY-SA unless otherwise noted.