Lorraine Dollis is Daniel Dollis's ex-wife and mother of their son, Ben. She never makes an appearance in the game and is only mentioned.

A year prior to the game, she had divorced Daniel for one reason only: his lack of commitment to his family compared to his job. She has always believed in the prospect of her family once again coming together. Daniel has custody of Ben, but Lorraine is given visitation rights once a month.

On December 25th, 1997, Lorraine went to see a concert with Ben at Central Park which starred Melissa Pearce. Ben felt sick so he left the area to get some fresh air. Mitochondria Eve appeared and turned the audience into orange slime. Lorraine was one of the victims.

Because of Lorraine's death and the events of the game, Daniel decides that it is now time to commit himself to his son rather than spend all his time at work. 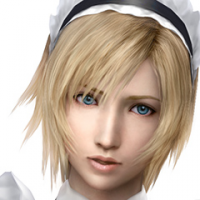