View source
watch 01:36
We're Getting Mutants in the MCU - The Loop
Do you like this video?
Play Sound
Maya Brea 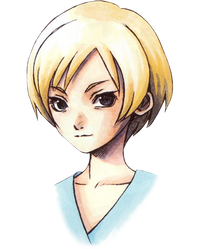 Because Aya was born in Boston, Massachusetts, there is a high probability that Maya was too. Like Aya, Maya was also of half-white, half-Japanese descent.

Maya, along with her mother, Mariko, was involved in a car accident in December 1977 after her mom signed herself and her daughter to become organ donors (possibly due to Mariko being possessed by Eve).

Mariko, Maya and Aya were brought to St. Francis Hospital. Unfortunately, Mariko and Maya were deemed deceased. Maya's kidney, which the doctors noted was unusually hot, was given to Melissa Pearce, who would later become the second Mitochondria Eve. Maya, however, became the host of the original Eve. Maya's cornea was also preserved for possible future use for Aya, who was born with a eye defect in her right eye.

Two years later, because Aya needed a cornea transplant, Maya's cornea was given to Aya's eye, thus causing Maya's neo-mitochondria to reside within Aya. Maya's memory of her death was appearing right before Aya.

According to Truebred Eve, even after the kidney transplant from Maya to Melissa, Hans Klamp continued to study Maya's liver cells which had Eve, and he eventually cultured a body of "Maya".

Aya witnesses a hallucination of her sister when the tragedy occurs at Carnegie Hall. Maya coughs, and runs away. Aya later sees her run away multiple times throughout Manhattan, but Maya always disappears.

In the EX game, Aya confronts Truebred Eve in the form of Maya Brea, on the top level of the Chrysler Building. Eve claims that the body she is in is cultured from the real Maya's liver cells. Eve then briefly return Maya's consciousness. Aya and Maya have a brief yet emotional reunion before being cut off by Eve. Maya then transforms into a green colored organism similar to Aya's liberation spell, and ensues into a battle with Aya, but is eventually defeated.

When Aya was about to be taken over by Eve due to her evolved mitochondria, Maya's personality began fighting the Eve persona to protect her sister. Powered by her willpower to "go home" where Aya's "waiting for her," the determination is strong enough to suppress Eve's consciousness and free Aya from her control. Aya realizes that Maya will always be with her and goes home.

In the introduction of Parasite Eve II, Aya briefly talks about Maya to Pierce Carradine through a photograph. Aya tells Pierce that she always dreamed about Maya asking for her help, and he was surprised to hear that she had a sister. She is no longer mentioned in the series after this.

Maya and Aya in the hospital.