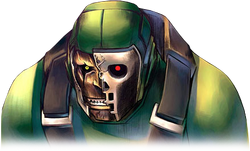 No. 9, also known as King GOLEM No. 9, is a GOLEM-type AMNC encountered by Aya Brea during Parasite Eve II.

No. 9 was the first human/ANMC created to help keep the ANMC under control and to hunt down escaped ones or staff in the case of Fred Bowman. No. 9 was previously a human who requested Neo Ark to transform him into a NMC, but unlike other test subjects, he paid the scientists to retain most of his human intelligence and memories. The transformation still leaves him slightly mad, however, evidenced by his insane laughter and actions.

His uniform resembles the Standard Close Combat GOLEM. He also could have served as a commander role of the brainless GOLEM defense units stationed in the shelter and Neo Ark.

No. 9 claims to be a "Hunter" like Aya for Neo Ark. He uses two types of blades, a machete that he occasionally ignites in flame by first rubbing some sort of flammable liquid on it, and a Gunblade, which can be obtained by the player. He also wears two different kinds of outfits, one with a black kevlar vest and the other with a yellow tactical vest. He rides a large motorcycle 1600ccs or larger.

He encounters Aya first in the Akropolis Tower, in which he attacks Rupert Broderick in the church. He is encountered on the roof and is defeated by Aya. As he flees, the tower explodes.

He then engages Aya in the town of Dryfield in the Mojave Desert. When Aya calls him for a murderer for him killing people at the tower, No. 9 claims he "saved" Los Angeles that night. At a fight, he claims he "gets it now" and says that Aya is connected to someone called "Eve". He is then combusted by Aya's awakening powers and disappears.

Afterward he encounters Aya in the Submarine Tunnel in the Neo Ark facility, kidnapping Eve after she runs off.

The final encounter with No. 9 occurs in the Pod Service Gantry as he is about to enact his plan and appears to be helped by Kyle Madigan, but Kyle shoots him in an act of betrayal, causing him to be eaten by the large Pupa NMC instead of Eve.

No. 9 at Akropolis Tower.

No. 9 in a Dryfield building.

No. 9 with Eve and Kyle Madigan.
Community content is available under CC-BY-SA unless otherwise noted.
Advertisement