This article details the many outfits that Aya Brea wears in each of her game appearances. In The 3rd Birthday, Aya's outfits also affect the gameplay.

Aya wears this dress at the beginning of the game. The outfit is a long black dress that is slit down Aya's left side, enabling her to run and walk properly without having to slow down. The dress is also sleeveless, making her upper body stand out. Prior to entering Carnegie Hall for the first time, Aya also wears a long gray coat with this dress.

The outfit is one of the most known of all of Aya's outfits as it appears in various media and most promotional artwork.

Aya will wear this outfit through the rest of the game after the opera incident.

Later on in the game, after entering a helicopter, Aya loses her jacket and simply runs around wearing the shirt and pants. This outfit is also very identifiable with Aya, but doesn't appear in most media artwork and is in only few of Nomura's artworks.

Aya wears this at the start of the game. The outfit looks a lot like her NYPD Uniform, but instead, has a brown Leather Jacket (which appears black in FMV cutscenes).

Aya also wears a variant of this in the M.I.S.T. Center, with a black t-shirt and a brown leather shoulder holster worn over the shirt. While in the shooting range, Aya also wears red ear muffs with the black shirt ensemble. 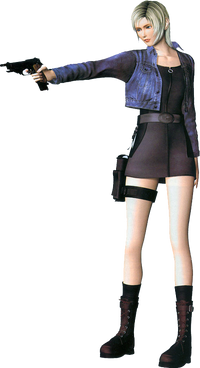 Aya wears this upon her arrival at Dryfield and for the rest of the game.

Her attire consists of a short black dress with a full length, front-opening zipper, a black belt, and tall brown boots with black socks. She wears a short blue denim jacket over-top the dress; it is called the Assault Suit in-game.

Her equipment includes a tactical holster for her sidearm (Beretta 93R 9mm, or 'M93R' as its described in-game), which she wears on her right thigh.

Aya can unlock many different outfits that will effect gameplay in movement speed and resistance to damage; generally speaking, a higher defense reduces movement speed, although this is not always the case. There are a total of eleven outfits in the game, but only two are available at the outset – Black Leather and White Eider.

In the Japanese version, Aya's voice clips for movement and damage (grunts etc.) vary when she is wearing different outfits; this is not present in the English-voice versions.

Completing a playthrough of the game while using only one outfit will unlock a "view mode" for that particular outfit in the "Protective Gear" menu, where you can view the outfit in various states of distress, among other features.

Defense: B
A black tank top and distressed jeans don't stand up to taking damage, but their slim fit means easy movement.

This is Aya's default outfit. The outfit consists of a sleeveless black leather top that is tied round the front. She also wears torn blue jeans along with buckled black boots that come just under her knees. The outfit includes a black belt, a bracelet and a silver name tag necklace.

The outfit in battle is balanced; it allows her to run at good speeds while also taking a fair amount of damage before becoming completely shredded.

This outfit is the same as Aya's casual outfit, except that Aya wears a white winter jacket overtop.

This outfit has a higher damage resistance compared to her Black Leather outfit.

This outfit is that of a typical Japanese maid. Aya wears a short black maid dress along with a white apron. She also has a red bow tied around the collar. The outfit also consists of long white socks and black sandals, completing the look.

This outfit out of all of them takes the least amount of damage and will easily shred off if the player is not careful. It is recommended that only experts use this outfit after a few playthroughs. This outfit is unlocked after clearing easy mode once, or beating it on any higher difficulty first.

Defense: B
A black miniskirt suit. The peekaboo red lingerie gives it grown-up appeal, while the glasses lend a frosty touch.

This outfit is one of the most revealing outfits. Aya wears a professional looking black suit jacket with a small miniskirt. She also wears black heeled shoes while the look is flattered by Aya's tied back hair, tights, a choker and red rimmed glasses.

The outfit in battle is something to be cautious of. Aya is able to run at high speeds and dodge with ease but because of the outfit's flimsiness, Aya can't take a high amount of damage compared to that of Aya's casual or knight outfit so players must wear this with caution.

After completing the game once on any difficulty, Aya can find this in the open locker on the left side of CTI locker rooms.

Defense: C
Take that, winter! Denim hotpants and a necklace evoke an eternal summer. This bikini has a refreshing vulnerability.

Aya's most revealing outfit, it's simply made up of a brown bikini top, a bikini bottom covered in blue short shorts, and a pair of brown sandals.

This outfit can be unlocked by clearing the game on the Hard difficulty and obviously has the weakest defense.

Defense: C
A daring bunny-girl costume. Its long ears and puffy tail are just adorable-and surprisingly useful during an Overdive.

This can be unlocked by beating the game on the Insane difficulty. Despite its name, the Titanium Bunny outfit has very weak defense.

Defense: C
A striking blue cheongsam with a heart on the bodice and an off-the-shoulder design. The askew hairstyle is a cute extra.

Aya can also wear a short Chinese dress. The dress is a blue sleeveless dress with golden linings and an imprint of a Chinese dragon. The dress is just as short as her maid's dress. This allows Aya to take quite a bit of damage but does increase her speed greatly.

Aya is able to unlock this by clearing the game on Normal mode, it will be instantly added to her inventory. 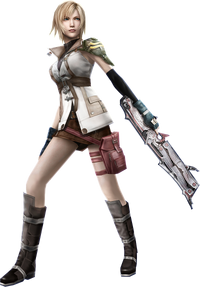 Defense: A
Dress like Lightning from Final Fantasy XIII. Once this costume takes damage and is destroyed, look for her l'Cie mark beneath.

This outfit is the same as that worn by Lightning, the protagonist of Final Fantasy XIII, although it lacks both her red cape and her gunblade holster. The outfit is also fairly balanced, not harming Aya's speed while also allowing her to take a fair amount of damage. When the outfit is damaged, the l'Cie brand on her chest will show – something that was never seen in Final Fantasy XIII. While wearing the outfit in the Japanese release of The 3rd Birthday, Aya's voice will also change to sound like Lightning; indeed, the existence of the outfit is largely a reference to the fact that the two characters have the same Japanese voice actress.

This outfit is only unlocked in Japan if the player registers their copy at the Square Enix website; for the Western versions, the requirement is that the player must accomplish at least half of all feats at the Hard and higher difficulties.

In Dissidia 012 Final Fantasy, Lightning is also able to wear Aya's default clothing, the Black Leather, as a downloadable outfit, which is available from PSN using a code provided with The 3rd Birthday in Japan and the US, and with the Twisted Edition in Europe.

Defense: B
A woman's Santa costume. Doomed to get heavy use during the holidays, then be shoved in a closet for the rest of the year.

Because the game was released near Christmas time in Japan, Aya also has a Santa suit. This outfit is different compared to her one in the Parasite Eve II promotional artwork of her and Kyle.

It can be unlocked after completing the game once on any difficulty, Aya can find it in Maeda's house in the left locker. 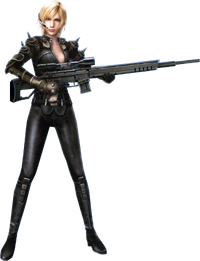 Defense: B
A prototype Overdive suit that analyzes all kinds of biological data while Aya is diving. Not made for privacy.

Also known as the OD Suit, this leather-like suit is all black and is accompanied by a pair of knee-length boots and spiked arm armor.

It can be unlocked by completing the game five times on any difficulty. 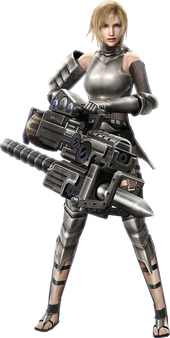 Defense: A
An authentic suit of armor from an antique shop. Provides both major defense and good looks. You feel brave just wearing it.

This outfit consists of Aya wearing armor that covers her whole entire body, excluding her head.

This outfit allows Aya to take minimum damage thus being the strongest out of all of Aya's attire in exchange of hampering her movements. This can be unlocked by defeating the game on the Deadly difficulty.

Although not an unlockable outfit, Aya is seen donning a white wedding dress in certain cutscenes, sometimes seen covered in blood.

Aya in her opera dress.

Nomura artwork of her NYPD uniform.

Aya in her default outfit.

All of Aya's intact and completely shredded clothes.

The l'Cie mark on the Lightning Custom outfit.

The l'Cie mark on the Lightning Custom outfit.