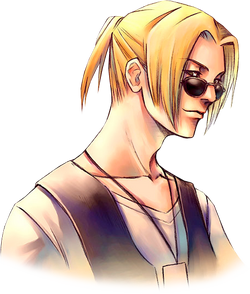 Pierce D. Carradine is in charge of MIST's training area. He doesn't like guns and does the technical work.

As an investigator, he is assigned to MIST's intelligence division. A master at information "retrieval", he is not above using the experience gained from his illegal hacking days to find out what he needs.

A natural loner with few friends, he's rather laid back and considers Aya Brea a close friend, trusting her words even when she can't prove herself at the time. It also seems he developed feelings for her. He usually delivers news to Aya when they're on the phone.

When Aya begins to suspect Eric Baldwin during the game, Pierce researches him and any time they are on the phone, he seems to come up with something new for her. He makes the deal with Gary Douglas about selling Aya guns and is always ready to get her the backup she needs.

If the player is going for the best ending and went through the Full Moon Gate, Pierce shows up at Dryfield in the Mojave Desert, but gets hurt on the water tower. Aya then needs to get three ice bags to him quickly. He will also give her his SUV key, but it is recommended to deliver the three ice first since it may turn into "Bag of Water" in the inventory, and giving him one "Bag of Water" results in this sidequest failing.

Pierce then appears at the shelter at the Pod Service Gantry, and activates the lift to Neo Ark for her.

He later helps Aya by calling in the marines.

After the marines arrive, Aya may save him in a freezer, a requirement for the best ending and gives 30,000 BP.

After the events of the game, he works with Kunihiko Maeda on a scientific project together. He gave Aya and Eve Brea passes to the American Museum of Natural History, implying that Kyle Madigan and Pierce contacted each other and wanted Kyle's appearance to be a surprise.

Pierce in the shelter's freezer.
Community content is available under CC-BY-SA unless otherwise noted.
Advertisement