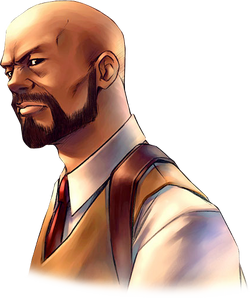 Aya comments that he's usually quiet and reserved, but becomes a wildman around NMCs, and nobody wants to be his partner as a result. Aya is similar because of the stigma of her having Parasite Energy, so they are a duo of outcasted agents. He is also skilled with weapons and aiming, and once won first place in a shooting contest.

According the official website, Rupert once worked with his clerical skills in an accounting office. Rupert's daughter was killed by an NMC during the New York Blockade Incident in New York City during Parasite Eve.

At the end of the incident, Rupert Broderick joined MIST to fight NMCs, likely as a form of revenge. His attitude is focused and determined to deal with the NMC threat due to his loss.

Rupert first appears in Akropolis Tower, saving her from the Boss Stranger. He shoots it once, then another five times before kicking it. He orders Aya to call MIST for back up. Being the year 2000, Aya has to run off and separate from Rupert to find the nearest payphone instead of simply taking a smartphone from her pocket and continuing her investigation with Rupert. Aya later finds Rupert being ambushed by No. 9 GOLEM in a church. Upon seeing Aya, No. 9 flees. Aya notices Rupert is hurt and is bleeding from his arm(s). For silly plot reasons and possibly poor writing, Rupert suggests to Aya that she should chase after No. 9, despite that No. 9 is fully armed, hostile, and is shown to superhumanly jump high. A wiser option would be to wait for reinforcements to arrive as Aya already called for backup.

After Aya defeats No. 9 on the roof, Aya is alarmed that there are bomb(s) in the building. Rupert tells Aya not to worry as they are rescued by a helicopter before the building explodes. Back at M.I.S.T. Headquarters, Rupert is seen with his arm bandaged. Due to his arm, he doesn't go to Dryfield with Aya.

Depending on the ending a player receives, Aya will either meet Jodie Bouquet or Rupert towards the end of the game outside the shelter. Rupert for the bad ending, Jodie for the good. In the bad ending route, he gives Aya his Mongoose handgun.

In the end of Parasite Eve II, he becomes the leader of MIST due to the exposure of Eric Baldwin as an agent of the Shadow Government. He works with Jodie on a secret project: the full public disclosure of MIST and the NMCs.

Rupert outside the shelter.
Community content is available under CC-BY-SA unless otherwise noted.
Advertisement