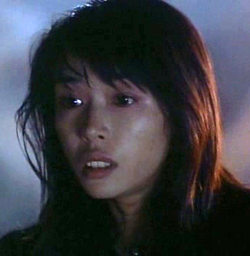 Sachiko Asakura (朝倉 佐知子 Asakura Sachiko) is a primary character in the Parasite Eve novel. Asakura is portrayed by Tomoko Nakajima in the film adaptation.

Asakura is a student of Toshiaki Nagashima studying into mitochondria and cells. Asakura is described as a kind bubbly young woman who cares about everyone.

When Toshiaki's wife Kiyomi dies, Asakura starts to become gravely worried about her teacher as he grows obsessed with the Eve project. Asakura also becomes horrified as she found out that the mitochondria cells for Eve are in fact Kiyomi's taken from her liver but agrees to help Toshiaki with his research in order to help with her paper. Asakura would spend hours in amazement watching Eve's cells multiply and grow deducting that this could be the next stage in evolution.

Unfortunately though Eve came to possess Asakura in most of her work before reliving control of her. Asakura would then have her mind taken over again by Eve during her press conference about mitochondria, pitying humans and spontaneously combust a few spectators, again Eve lets Asakura go who now has no memory about the events that had just transpired.

At the end of the novel after Eve's destruction Asakura is now in charge of the lab and discovers that there are still many Eve cells in the lab, Asakura ponders about everything that happened before placing the cells into a furnace and destroys the cells for good.

Differences between the novel and film

In the novel, when Asakura had her body taken over by Eve, Eve's leaving was far more violent. Asakura first begins to claw at her throat before the cells leave her through her mouth, Asakura would then burst into flames but survived the ordeal only to be badly scarred and have half her body burned. In the film however, Asakura simply faints and Eve leaves through her eye.

Retrieved from "https://parasiteeve.fandom.com/wiki/Sachiko_Asakura?oldid=17498"
Community content is available under CC-BY-SA unless otherwise noted.