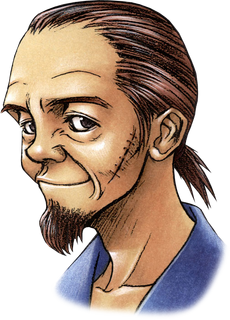 Torres Owens is a character from Parasite Eve.

Torres works closely with Wayne Garcia and does his best to keep Wayne's gun obsession under control. Wayne and Torres have a strained relationship, due to Wayne's pro-gun beliefs and Torres' anti-gun beliefs conflicting, plus Wayne often does secret gun modding behind Torres' back, such as upgrading Aya Brea's weapons.

Torres is a seasoned cop, but his career took a sudden turn after he lost his daughter in a gun mishap. Sworn to never fire another gun again to help keep the gun problem under control, he took a job in the N.Y.P.D.'s Weapon Department to ensure the firearms are properly regulated, as well as never using a gun for many years. The incident was so traumatic that he never trusted young cops with firearms.

Ironically he is eventually killed during a raid on the police department by one of Mitochondria Eve's mutated creatures (a Dogman) while not even managing to shoot, much to Wayne's despair. Wayne says Torres entirely can't blame guns for his daughter's death, and Torres changes his mind and agrees, as there were other factors involved such as the safety violations. As he dies, Torres tells Wayne to take care of the place.

Retrieved from "https://parasiteeve.fandom.com/wiki/Torres_Owens?oldid=17065"
Community content is available under CC-BY-SA unless otherwise noted.