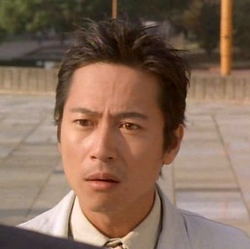 Dr. Toshiaki Nagashima (永島利明 Nagashima Toshiaki) is a university professor who specializes in the subject of mitochondrial research. He can be considered the protagonist of the novel and its film adaptation.

At the start of the novel, his wife, Kiyomi Nagashima, is rendered braindead due to a mysterious car crash. Grief-stricken, he starts to lose his sanity, as well as feels infrequent outbursts of heat. Toshiaki is ultimately forced to euthanize Kiyomi as a result.

He later finds out Kiyomi registered herself on the organ donor list, and bribes doctor Takashi Yoshizumi to give him his wife's liver in exchange allowing the doctor to use his wife's kidney to be transplanted into a patient, Mariko Anzai. He then cultures the liver cells to feel that he is reviving his wife, labeling them Eve, and makes unusual discoveries with his student Sachiko Asakura, seeing that the cells are dividing at a rate more rapid than normal cells. He publishes a report on nature with his student, when the turning point of the novel starts. The cells are discovered to be the dispersed form of a life form that plans to take over the planet as the dominant species and overthrow all other life forms, by birthing the "perfect being."

Toshiaki is manipulated to give a semen sample to the cells which has taken on the form of his wife. Toshiaki, along with the doctor, tries to stop Eve before it's too late. Eve eventually births the ultimate being but makes a fatal error in that Toshiaki's sperm carries a line of male mitochondria which will be exterminated should the perfect life from came to being. The offspring then suffers a rebellion within its own body. Toshiaki kills himself with the ultimate being to stop the powerful outburst from harming civilians. Toshiaki meets his demise peacefully trying to touch Mariko, seeing her as the last remains of his beloved wife: a wish Mariko's father grants after his death.

At the end of the novel, Sachiko Asakura discovers more samples of liver cells, but destroys them.

In the film adaptation, Toshiaki instead dies while kissing Eve, and the two of them are burned to death.

Retrieved from "https://parasiteeve.fandom.com/wiki/Toshiaki_Nagashima?oldid=17583"
Community content is available under CC-BY-SA unless otherwise noted.