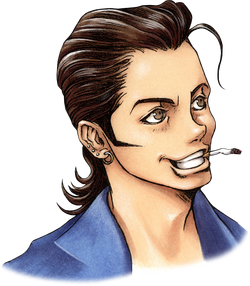 Wayne Garcia is a rebellious young cop with a passion for firearms. His passion is so powerful that he actually collects gun trading cards. It may be his ultimate goal to create his own line of high-powered weapons.

Wayne is responsible for the NYPD weapon department, and works alongside Torres Owens. Wayne and Torres have a strained relationship, due to Wayne's pro-gun beliefs and Torres' anti-gun beliefs conflicting, plus Wayne often does secret gun modding behind Torres' back, such as upgrading Aya Brea's weapons. Torres accuses Wayne of viewing guns like toys. Aya can talk to Wayne to store items and equipment.

Wayne does not have a strong role in the game, although when Torres is killed by a Dogman during the attack on the precinct, he swears vengeance on Mitochondria Eve and the Dogman.

Wayne also seems to have a bit of a crush on Aya, calling her "babe", although Aya doesn't seem to enjoy this, telling him to "cut the crap" when he flirts with her.

Wayne's menu has a "Rare T-Card Collection" option. However, nothing in the game tells you what this does. As things turn out, there are fourteen rare gun trading cards available in the game. All fourteen are found scattered around the Chrysler Building. Give them to Wayne, and they'll work just like mod permits or blank trading cards, except that you get two modifications instead of one.

If you give Wayne around 9-12 trading cards, selecting "Rare T-Card Collection" will have Wayne give you a Tool Kit. The Tool Kit gives you an unlimited set of tools.

If you give Wayne all 14 trading cards, selecting the option will have Wayne give you a Super Tool Kit. This gives you an unlimited amount of super tools.

If, during the course of your adventure, Aya gives Wayne 300 pieces of Junk, he'll use his technical aptitude to turn all that seemingly worthless Junk into one of the game's ultimate guns. You can either have him create a specific type of gun, or you can leave him to his own devices and have him create something for you at random.[1]

Wayne being called an idiot by Torres.
Community content is available under CC-BY-SA unless otherwise noted.
Advertisement